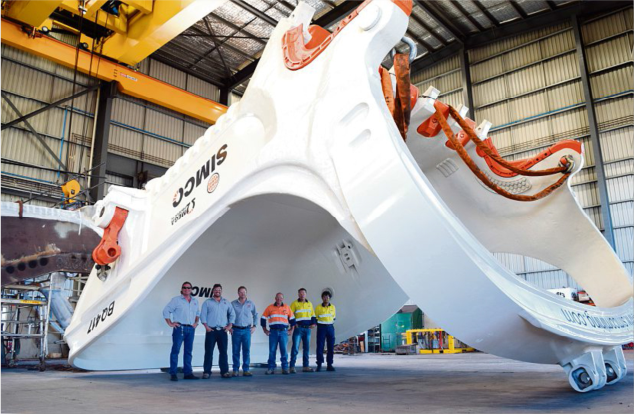 Bucket weighing 90 tonnes finds its home at Wesfarmers Curragh Mine

ONE of the largest dragline buckets made has been built in a Mackay workshop.

The huge scoop that removes overburden from coal seams will this week begin its work at Wesfarmers’s Curragh Mine near Blackwater after being transported by road at the weekend.

The project, and others, is the result of a co-operative effort by two Mackay-based firms, SIMCO and Independent Mining Services Queensland.

The bucket was engineered and designed by SIMCO, which commissioned IMS Qld to fabricate the project.

SIMCO director Marty Simpson said the bucket was a repeat order from Wesfarmers after IMS Qld build a smaller one for the mine in 2013.

“We selected IMS because they have a state-of-the-art facility,” Mr Simpson said.” IMS is one of only a few firms in the region that can lift a bucket of this size in its workshop.”

IMS Qld director Gary Brown said the bucket weighed about 90tonnes and took eight weeks to build. He said eight to 10 people a shift worked around the clock to complete the project.

The steel in the bucket was cut in Mackay, adding to the mostly local content of the project.

“It will move a payload of 240tonnes of dirt per swing when in operation,” Mr Brown said. It was the largest project to be built from the ground up at the workshop, he said.

The bucket was the second to be built in the IMS Qld workshop in three months, with another smaller version sent to Newlands Mine near Glenden.

The latest project left the IMS Qld premises on Saturday for the eight-hour trek over the Eton Range and along the Peak Down Highway to Emerald.

It was to arrive at Curragh Mine yesterday.

Due to its size the load was to be under police escort, normal escort and accompanied by Ergon Energy personnel who were to lift power lines if necessary along the way.

Mr Simpson said after its arrival at the mine it would take about a day to change over and fit the bucket to the dragline.

“This is a good news story for Mackay in the current economic climate,” he said. “And SIMCO has orders for further buckets in place.

With over 32 years of mining experience, SIMCO specialises in developing cost effective and innovative Mining Products and Services for both domestic and overseas markets.